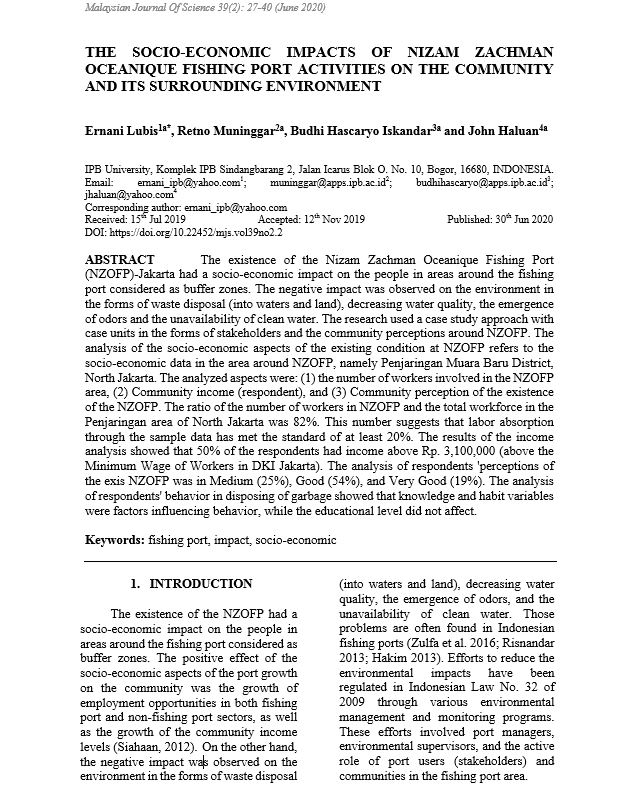 The existence of the Nizam Zachman Oceanique Fishing Port (NZOFP)-Jakarta had a socio-economic impact on the people in areas around the fishing port considered as buffer zones. the negative impact was observed on the environment in the forms of waste disposal (into waters and land), decreasing water quality, the emergence of odors and unavailability of clean water. The research used a case study approach with case units in the forms of stakeholders and the community perceptions around NZOFP. The analysis of the socio-economic aspects of the existing condition at NZOFP refers to the socio-economic data in the area around NZOFP, namely Penjaringan Muara Baru District, North Jakarta. The analyzed aspects were: (1) the number of workers involved in the NZOFP area; (2) Community income (respondent) and (3) Community perception of the existence of the NZOFP. The ratio of the number of workers in NZOFP and the total workforce in the Penjaringan area of North Jakarta was 82%. This number suggests that labor absorption through the sample data has met the standard of at least 20%. The results of the income analysis showed that 50% of the respondents had income above Rp. 3,100,000 (above the Minimum Wage of Workers in DKI Jakarta). The analysis of respondents 'perceptions of the exis NZOFP were in Medium (25%); Good (54%) and Very Good (19%). The analysis of respondents' behavior in disposing of garbage showed that knowledge and habit variables were factors influencing behavior, while the educational level did not affect.