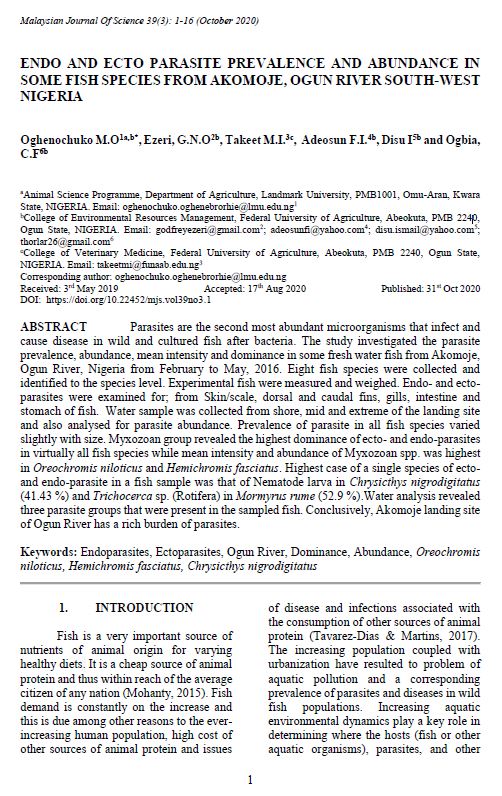 Parasites are the second most abundant microorganisms that infect and cause disease in wild and cultured fish after bacteria. The study investigated the parasite prevalence, abundance, mean intensity and dominance in some fresh water fish from Akomoje, Ogun River, Nigeria from February to May, 2016. Eight fish species were collected and identified to the species level. Experimental fish were measured and weighed. Endo- and ecto-parasites were examined for from Skin/scale, dorsal and caudal fins, gills, intestine and stomach of fish.  Water sample was collected from shore, mid and extreme of the landing site and also analysed for parasite abundance. Prevalence percentage of parasite in all fish species varied slightly with size. Myxozoan group revealed the highest dominance of ecto- and endo-parasites in virtually all fish species while mean intensity and abundance of Myxozoan spp was highest in Oreochromis niloticus and Hemichromis fasciatus. Highest case of a single species of ecto- and endo-parasite in a fish sample was that of Nematode larva in Chrysicthys nigrodigitatus (41.43 %) and Trichocerca sp (Rotifera) in Mormyrus rume (52.9 %).Water analysis revealed three parasite groups that were present in the sampled fish. Conclusively, Akomoje landing site of Ogun River has a rich burden of parasites.