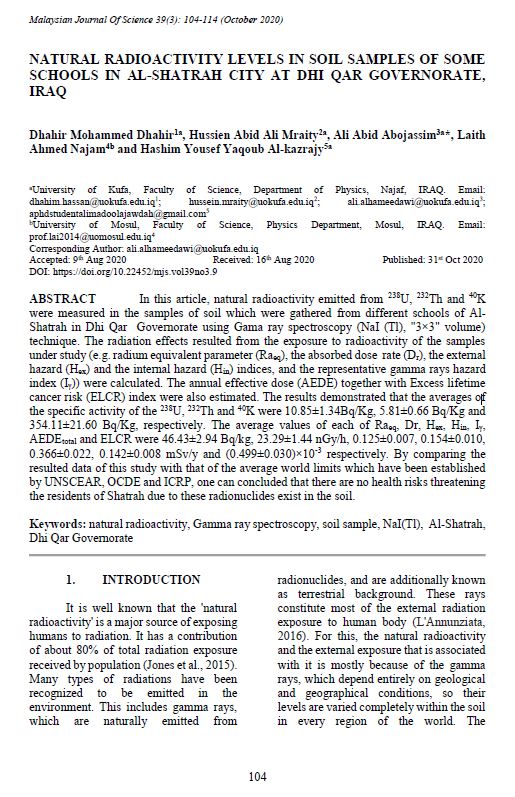 In this article, natural radioactive elements such as 238U, 232Th and 40K were measured in the samples of soil which gathered from the city of Shatrah in Dhi Qar  Governorate using the Gama ray spectroscopy (NaI(Tl)) technique. The radiation effects resulting from the radioactivity in the samples under study such as that of radium equivalent parameter (Raeq), the absorbed dose  rate (Dr), the external hazard (Hext) and the internal hazard indices, and the representative gamma rays hazard index (Iγ), were calculated. Also, the annual effective dose (AEDE) together with Excess lifetime cancer risk (ELCR) index resulted from the exposure to the radioactivity of the samples of the soil of the studied areas were calculated. The results showed that the averages of specific activity from 238U, 232Th and 40K were 10.85±1.34Bq/Kg, 5.81±0.66 Bq/Kg and 354.11±21.60 Bq/Kg, respectively. Comparing the resulted data of this study with that of the average world limits ​​which determined by UNSCEAR, OCDE and ICRP, one can concluded that there are no health risks threatening the residents of Shatrah due to these radionuclides in the soil.