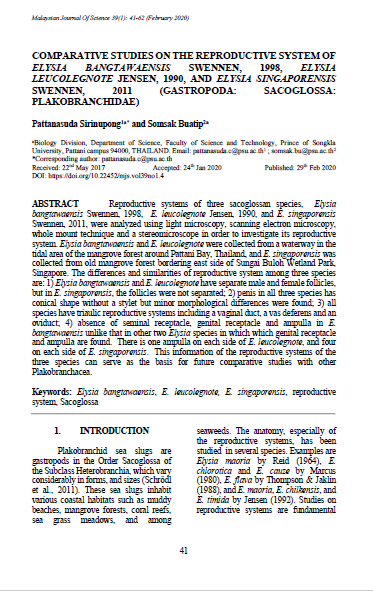 Reproductive systems of three sacoglossan species,  Elysia bangtawaensis Swennen, 1998,  E. leucolegnote Jensen, 1990, and E. singaporensis Swennen, 2011, were analyzed using light microscopy, scanning electron microscopy, whole mount technique and a stereomicroscope in order to investigate its reproductive system. Elysia bangtawaensis and E. leucolegnote were collected from a waterway in the tidal area of the mangrove forest around Pattani Bay, Thailand, and E. singaporensis was collected from old mangrove forest bordering east side of Sungai Buloh Wetland Park, Singapore. The differences and similarities of reproductive system among three species are:1) Elysia bangtawaensis and E. leucolegnote have separate male and female follicles, but in E. singaporensis, the follicles were not separated; 2)penis in all three species has conical shape without a stylet but minor morphological differences were found; 3) all species have triaulic reproductive systems including a vaginal duct, a vas deferens and an oviduct; 4) absence of seminal receptacle, genital receptacle and ampulla in E. bangtawaensis unlike that in other two Elysia species in which which genital receptacle and ampulla are found.  There is one ampulla on each side of E. leucolegnote, and four on each side of E. singaporensis.  This information of the reproductive systems of the three species can serve as the basis for future comparative studies with other Plakobranchacea.