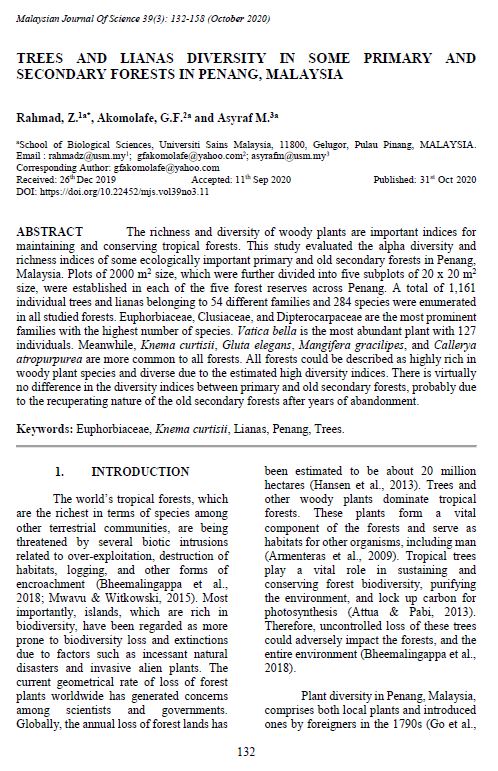 The richness and diversity of woody plants are important indices for maintaining and conserving tropical forests. In this study, we evaluated the alpha diversity and richness indices of some ecologically important primary and old secondary forests in Penang, Malaysia. Plots of size 2000 m2 which were further divided into 5 subplots of size 20 x 20 m2 were established in each of five forests reserves across Penang. A total of 1,161 individuals of trees and lianas belonging to 54 different families and 284 species were enumerated in all the studied forests. Euphorbiaceae, Clusiaceae and Dipterocarpaceae were the most prominent families with highest number of species. Vatica bella was the most abundant plant with 127 individuals. Knema curtisii, Gluta elegans, Mangifera gracilipes and Callerya atropurpurea were more common to all the forests. All the forests could be described as highly rich in woody plant species and diverse due to the high diversity indices estimated. There is virtually no much difference in the diversity indices between the primary and old secondary forests probably due to the recuperating nature of the old secondary forests after years of abandonment.