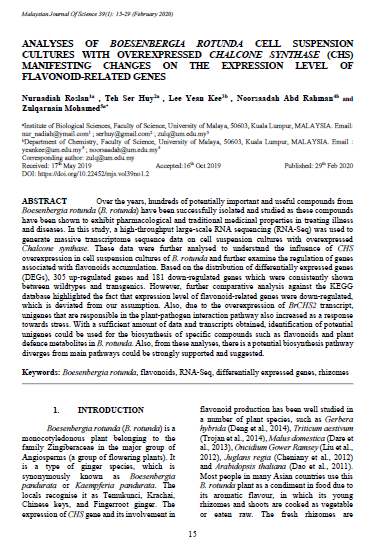 Over the years, hundreds of potentially important and useful compounds from Boesenbergia rotunda (B. rotunda) have been successfully isolated and studied as these compounds have been shown to exhibit pharmacological and traditional medicinal properties in treating illness and diseases.  BrCHS2 transcript was chosen to be introduced into B. rotunda cell suspension culture for further study due to its higher abundance in rhizome as reported from previous study. Later, a high-throughput large-scale RNA sequencing (RNA-Seq) was used to generate massive transcriptome sequence data. This data was further analysed to understand the influence of BrCHS2 transcript overexpression in suspension cultures of B. rotunda. A total of 102,195 unigenes with an average length of 1008bp (N50: 1646bp) were assembled where 65.8% of them (67,251 unigenes) were successfully cross-referenced to several databases for gene annotation. To comprehensively examine the regulation of genes associated with flavonoids accumulation, RNA-Seq analysis of WT and TL cell suspension cultures were performed. Based on the distribution of differentially expressed genes (DEGs), 305 up-regulated genes and 181 down-regulated genes which were consistently shown in all three group of comparisons (WTs vs TLs), indicated that there were relatively higher numbers of upregulated genes in the transgenic suspension cultures compared to the wild-types as a result of BrCHS2 overexpression. However, further comparative analysis against the KEGG database highlighted the fact that flavonoid and related downstream pathways were down-regulated, which is deviated from our assumption. Also, due to the overexpression of BrCHS2 transcript, unigenes that are responsible in the plant-pathogen interaction pathway also increased as a response towards stress, indicating an important function on plant resistance. With a sufficient amount of data and transcripts obtained, potential unigenes that could be used for the biosynthesis of specific compounds such as flavonoids and plant defence metabolites in B. rotunda could be identified. Also, from these analyses, there is a potential biosynthesis pathway diverges from main pathways could be strongly supported and suggested.