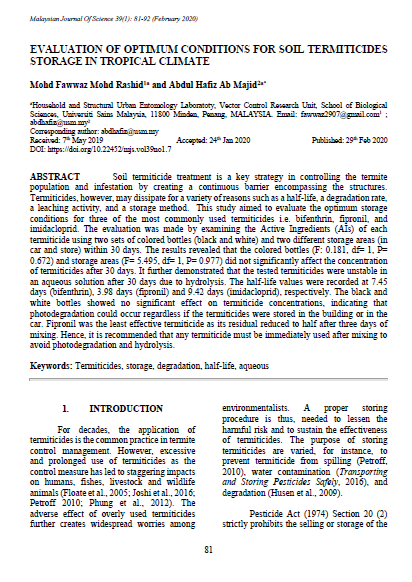 Soil termiticide treatment is a key strategy in controlling the termite population and infestation by creating a continuous barrier encompassing the structures. Termiticides, however, may dissipate for a variety of reasons such as a half-life, a degradation rate, a leaching activity, and a storage method.  This study aimed to evaluate the optimum storage conditions for three most commonly used termiticides i.e. bifenthrin, fipronil, and imidacloprid. The evaluation was made by examining Active Ingredients (AIs) of each termiticide using two sets of bottle colors (black and white) and different storage spaces (in car and store) within 30 days. The results revealed that the bottle colors (F: 0.181, df= 1, P= 0.672) and storage places (F= 5.495, df= 1, P= 0.977) did not significantly affect the concentration of termiticides after 30 days. It further demonstrated that the tested termiticides were unstable in an aqueous solution after 30 days due to hydrolysis. The half-life values were recorded at 7.45 days (bifenthrin), 3.98 days (fipronil) and 9.42 days (imidacloprid), respectively. The black and white bottles showed no significant effect on termiticide concentrations, indicating that photodegradation could occur regardless of the termiticides were stored in the store or in the car. Fipronil was the least effective termiticide as its residual reduced to half after three days of mixing. Hence, it is recommended that any termiticide must be immediately used after mixing to avoid photodegradation and hydrolysis.