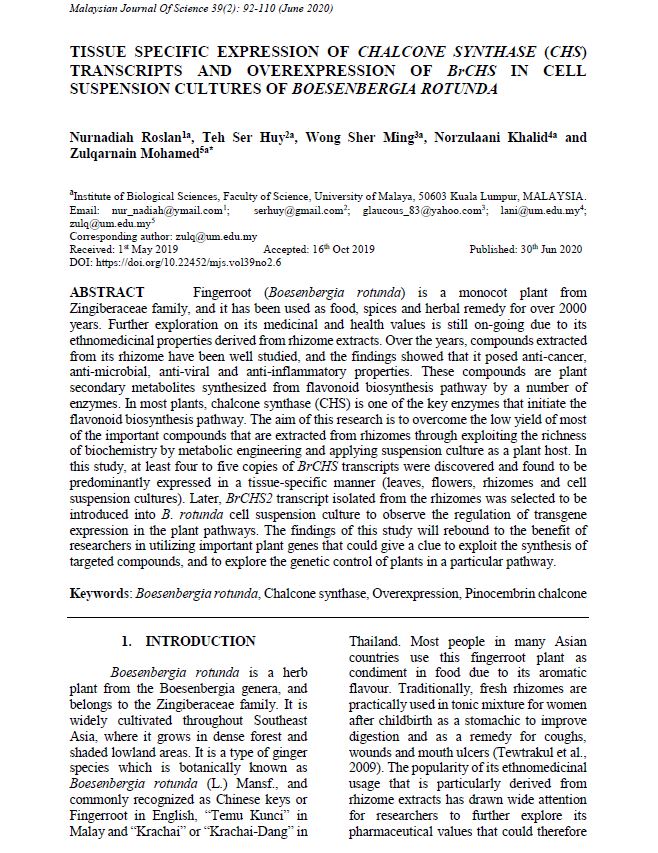 Fingerroot (Boesenbergia rotunda) is a monocot plant from Zingiberaceae family, and it has been used as food, spices and herbal remedy for over 2000 years. In some Asian countries, it is commonly consumed as a traditional meal or used as a spice ingredient and traditional medicine. Its ethnomedicinal properties derived from rhizome extracts have broadly drawn attention to further explore its medicinal and health values. Recently, the compounds extracted from its rhizome have been studied, and the findings showed that it posed anti-cancer, anti-microbial, anti-viral and anti-inflammatory properties. The bioactive compounds from rhizome extracts are plant secondary metabolites synthesized from the flavonoid biosynthesis pathway by a number of enzymes. In most plants, chalcone synthase (CHS) is one of the key enzymes that initiate the flavonoid biosynthesis pathway. In this study, at least four to five copies of BrCHS transcripts were successfully detected and predominantly expressed in a tissue-specific manner (leaves, flowers, rhizomes and cell suspension cultures). Later, BrCHS2 transcript isolated from the rhizomes was chosen to be introduced into B. rotunda cell suspension culture to observe the regulation of transgene expression in the plant pathways.